Olena by Elżbieta Benkowska in Cannes!

“Olena” by Elżbieta Benkowska, a director recently graduated from The Gdynia Film School, will be competing for this year’s Golden Palm of the 66th Cannes Film Festival in the category of short films. This year, there were 3 500 entries from 132 countries in this category. 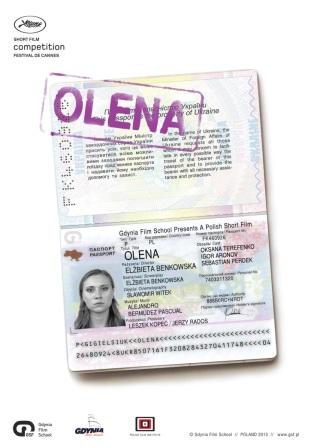 Benkowska’s film reached the top 9 and the winner will be announced on May, 26th during the Festival closing gala.
Benkowska isn’t the only Pole in Cannes this year. There will be a new film by Roman Polański: “Venus in Furs” competing in the main category. In addition, during special screenings the audience will have a chance to watch another Polański’s film, a never shown before documentary from over 30 years ago, “Weekend of a Champion”.
So far, no Polish feature film has qualified for the short films category of the Cannes festival. There have only been animations and documentaries entered and the last time it happened it was 20 years ago. The 15-minutes story is this year’s graduation film by Benkowska.
She tells a story about a Ukrainian couple travelling through Poland to Sweden. Their wallet is stolen on the train and during a fight, the thieves throw it on the railway. The titled Olena and accompanying her Dima have to find the wallet before their ferry leaves. Only then the real reasons of their trip is revealed.
Elżbieta Benkowska was born on Roman Polański’s 55th birthday. When she started her education at the Gdynia Film School, she received a matricula with number 01. – My mother has always loved numbers and dates. She has kept saying it had to mean something as I was born
the same day as Polański, Redford or Swayze. When I was 10, I watched “Rosemary’s Baby” and only then I realised it was Polański and he’s always been in my mind since then. Like every director, I dreamt about qualifying at the Cannes festival but I never thought it would be so
quick. Roman Polański will be there too. Who knows, maybe I’ll finally meet him? – says Elżbieta Benkowska. – I was very moved when they told me I was shortlisted. Of course I hope it wins. The chances are 9:1 so quite realistic. If I’m one of the 9 contestants I might as well win.
But if not, I won’t be disappointed. I’ll make another movie and maybe the next one will be awarded with the Golden Palm? After all the festival is being held every year so I’m, not stressed about it – she adds.
Qualifying “Olena” to the competition is not only an obvious success of its director, but also of the Gdynia Film School. It was created in 2010 on the initiative of the President of Gdynia: Wojciech Sczurek, the Polish Feature Films Festival in Gdynia director: Leszek Kopeć and a film director Robert Gliński, the then rector of PWSTiTV (The State Higher School of Theatre and Television) in Łódź. The Gdynia Film School is non-commercial and what’s exceptional, the future film directors are studying tuition free. “Olena” in the Cannes competition is an outstanding gift for the School and Gdynia city, which has been bound with cinematography for decades.
The oldest, preserved film shots of Gdynia reach the beginning of the 20’s, when the Polish government made a strategic decision to build a town and a sea port where a little littoral, Kashubian village stood. A film documented the arrival of the Poland’s President Stanisław
Wojciechowski to Gdynia and the opening of the first wharf, a visit of the Marshall Józef Piłsudski, the building of the fishing and cargo ports, the building of the Gdańsk shipyard and the city itself. Thanks to the Polish Telegraph Agency there still documentaries on the Polish ocean liners, sailing ships and Polish Navy warships. In the 30’s Gdynia became a “window onto the world” for the Poles, not only because of the city’s geographical location. It became a real movie star, too.
Today, Gdynia authorities are making sure the city returns to the Polish film map for good and maybe it becomes the country’s film capital city in the future. Along the most important film festival in Gdynia and the Gdynia Film School there’s a Pomeranian Film Foundation and the Gdynia Film Fund, which finances feature films, documentaries and animations. For those fascinated with film, there are also Pomeranian Film Workshops. Gdynia returns to big screens and there is a hope it will regain its well deserved place.
“Olena” competing in world’s most important film festival is a brilliant example that the filming in Gdynia can’t be neglected. – I am very proud to be Polish and I can represent not only Gdynia Film School, but also the whole country. I don’t feel any pressure. It might appear when I’m making my next film because I won’t be just Elżbieta, the Gdynia Film School graduate, but Elżbieta with the Cannes’ Golden Palm nomination – says Benkowska.